It was in 1965 that Dylan lost many traditional fans and gained others as he moved from purely acoustic to a mix of acoustic and electric.

In England it was in 1966 at the Manchester Free Trade Hall.

Photos below capture other sides of Bob Dylan, many not seen before and thanks to the photographers and the Guardian for publishing them in a series of posts (as well as the photographers’ publishers) 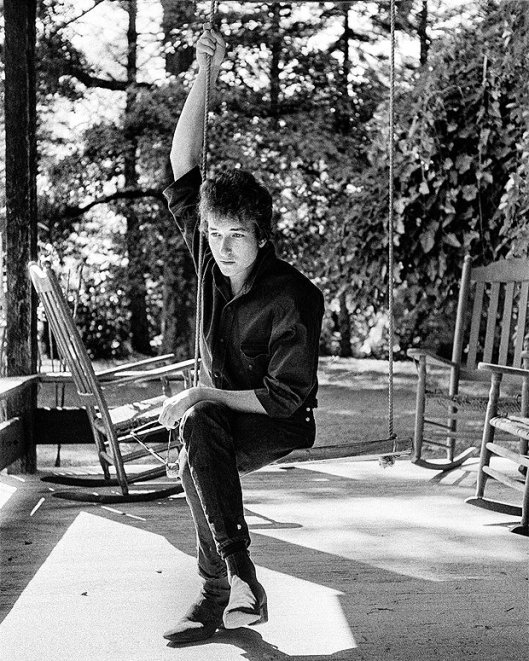 ‘He suggested I photograph him on the swing. His mood changed when he stood up and he pumped the swing higher and higher.’ 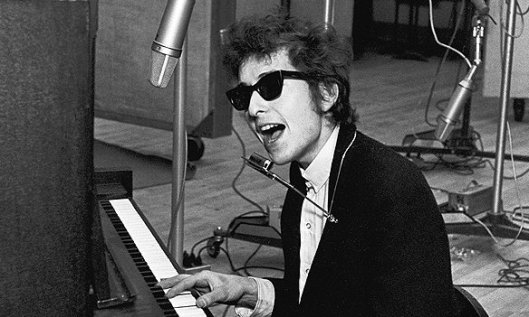 ‘It was obvious from the very beginning of the recording sessions that something exciting was happening.’

An outtake from the Bringing It All Back Home album cover shoot with Sally Grossman, Woodstock, January 1965. 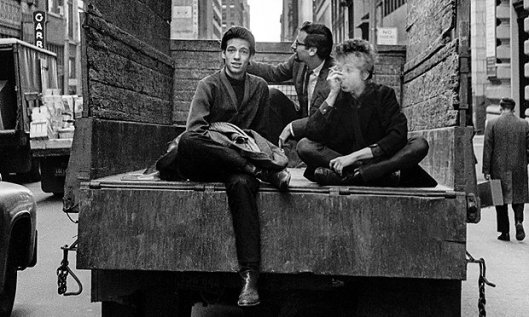 One of several unpublished photos of Bob Dylan on 5th Avenue with Peter Yarrow, of Peter, Paul and Mary, and the guitarist John Hammond Jr. 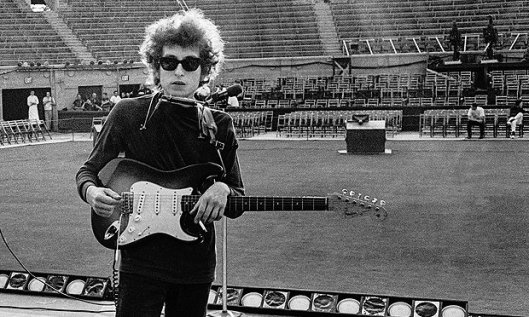 Having decided to photograph Dylan for his personal portfolio, it took Daniel Kramer six months to get permission from Dylan’s manager Albert Grossman. Kramer told the Guardian that it was a labour of love as “in the beginning you couldn’t sell a Dylan picture … it was matter of a process to introduce editors to the idea.” Kramer accompanied Dylan on a roadtrip from New York to Philadelphia for a concert at Town Hall
Photograph: Daniel Kramer

Bob Dylan recording Bringing It All Back Home in New York, 1965, Daniel KramerAccording to Daniel Kramer, the musicians in Columbia Records’ Studio A were all coached by Dylan, who played their parts for them on the piano. The sessions yielded the Dylan classics Subterranean Homesick Blues, Maggie’s Farm and Love Minus Zero/No Limit. However, Mr Tambourine Man was an out-take from Dylan’s previous LP, Another Side of Bob Dylan 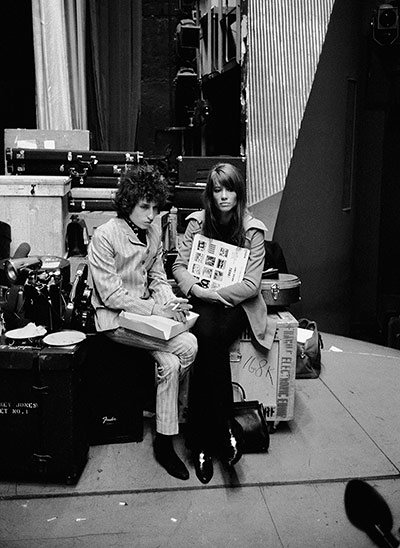 Dylan and Françoise Hardy backstage at L’Olympia, 1966In 1964, Dylan dedicated a poem to singer and actress Françoise Hardy who he had never met. This photo was taken on 24 May 1966 at l’Olympia, Paris after Dylan refused to return to the stage unless she was brought to him. She recalled that he looked like a vampire with yellow skin and long yellow fingernails. Later, at his 25th birthday party, at the George V, he took Hardy to his suite and serenaded her with I Want You” and Just Like a Woman.

She later stated that “the thought that he was giving me a message with his songs did not cross my mind.” They never met again

All photographs below : Ken Regan/Estate of Ken Regan/Ormond Yard Press 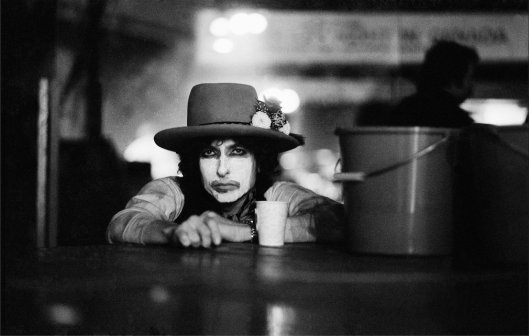 Regan recalled Dylan saying: ‘I want the people way, in the back,to be able to see my eyes’ 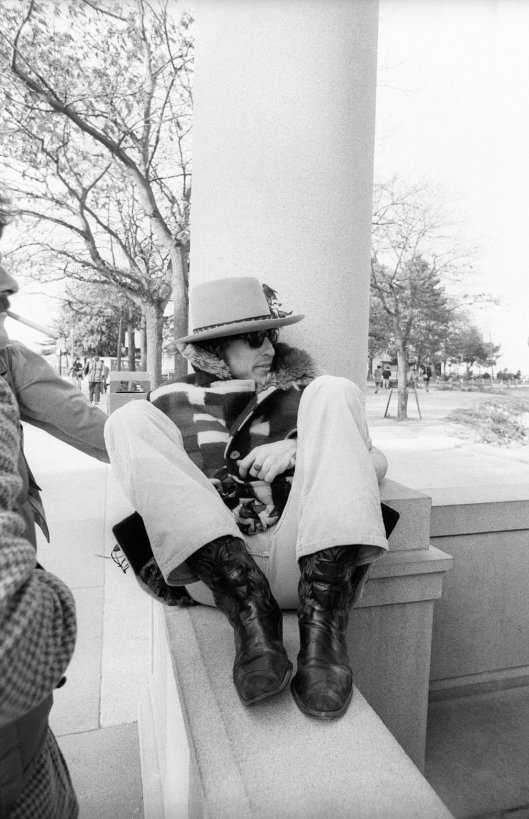 Visiting the Mayflower II and Plymouth Rock in Massachusetts.

It was here that Regan took a picture of the singer in a fur-collared coat, which would appear on the cover of the album Desire (Regan’s favourite Dylan album)

The Night of the Hurricane benefit at Madison Square Garden, December 1975, where Muhammad Ali visited Dylan backstage and gave him a gift – a huge boxing glove.

The show was to benefit the campaign for justice for Rubin ‘Hurricane’ Carter, the boxer wrongly convicted of murder in 1967

In New Haven, Connecticut, Regan photographed Dylan in his dressing room. ‘He turned around and looked right at me. I caught his eye and asked him to hold it for a minute.’ Dylan later said this was the best photograph anyone took of him.

The image was held back for 27 years, until it was used in 2002 on the cover of The Bootleg Series Vol 5: Bob Dylan Live 1975, The Rolling Thunder Revue.

Thanks to the Guardian

Over 5 decades of playing and recording, there are many sides of Bob Dylan.

Its that time again, April 30, when jazz lovers and aficionados remind others about the joy and creativity of jazz.

Although recorded jazz may be good to listen to , the ideal environment is LIVE jazz!

In November 2011, the United Nations Educational, Scientific and Cultural Organization (UNESCO) officially designated April 30 as International Jazz Day in order to highlight jazz and its diplomatic role of uniting people in all corners of the globe. International Jazz Day is chaired and led by Irina Bokova, UNESCO Director General, and legendary jazz pianist and composerHerbie Hancock, who serves as a UNESCO Ambassador for Intercultural Dialogue and Chairman of the Thelonious Monk Institute of Jazz. The Institute is the lead nonprofit organization charged with planning, promoting and producing this annual celebration.

International Jazz Day brings together communities, schools, artists, historians, academics, and jazz enthusiasts all over the world to celebrate and learn about jazz and its roots, future and impact; raise awareness of the need for intercultural dialogue and mutual understanding; and reinforce international cooperation and communication. Each year on April 30, this international art form is recognized for promoting peace, dialogue among cultures, diversity, and respect for human rights and human dignity; eradicating discrimination; promoting freedom of expression; fostering gender equality; and reinforcing the role of youth in enacting social change. 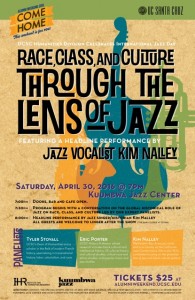 On August 17, 2011 an online petition was launched advocating for the establishment of an International Blues Music Day.

Within a few months the petition-group was joined by thousands of members from around the world, comprising of blues enthusiasts, musicians, celebrities, and promoters.  After reaching 15,000 members, a  formula for an annual date to celebrate IBMD was established as the first Saturday in August of each year with the inaugural celebration on August 3, 2013.  The initiative was the brainchild of world renowned blues musician Johnny Childs who also stars in the film The Junkman’s Son and serves as the President of the NYC Blues Society.